One day before: Update from CDF/D0

Tevatron’s experiments CDF and D0 just published their most up-to-date searches for the Standard Model Higgs boson. You can read the preprint here [arXiv:1207.0449] and take a closer look at the bonanza of new plots here.What they see is a mild excess especially in the h->bb decay channel, for which they have a better signal-to-background ratio with respect to the LHC. Taking into account the look-elsewhere-effect, this excess can be estimated as a 2.9 sigma deviation from the background-only hypothesis in the same mass range pointed out by ATLAS and CMS, at about 125 GeV. However, combining this result with the other channels (mainly h->γγ, h->WW->lnln, h->ZZ->4l) the deviation is much smaller. The breakdown of the separate contributions shows an enhancement in the h->γγ channel and a deficit in the h->WW decay. Overall, the three rates are still barely consistent with the Standard Model prediction, but the Higgs mass fit as a function of the W and top masses at present seems to prefer a low-mass SUSY-like scenario.

This excess did not show up only yesterday: taking a look at the same plots as the data piled up, there is an evident positive trend in the signal region, while the background region tends just to fluctuate as expected.

In the end, after 25 years of hard work, the bottom line from Tevatron is that there is an evidence of a scalar particle with mass around 125 GeV compatible with the Higgs boson. Whether this is a Standard Model one or not is still a matter of debate (perhaps for just one day!).

Joe Incadela, spokesperson of the CMS experiments, presents their new results on the Higgs boson searches!

JI: “The Standard Model has been confirmed by more than 100 analyses to better than 1%. Now only the Higgs boson remains to be discovered”.

JI: First channel: h->γγ ! Analysis is a multi-variate one, with ~15% gain w.r.t. cut-based, the latter used as a cross-check thanks to its robustness.

This decay channel has a low rate, but it’s very clean and allows a very sharp mass resolution

YOU CAN SEE IT WITH NAKED EYE!!! 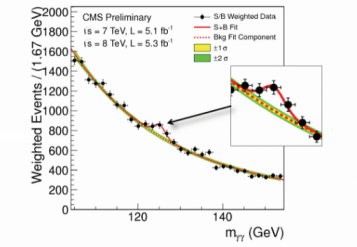 Here comes the h->ZZ->4l channel, which is very clean but has a very low yield.

9:38: Higgs discovered combining the γγ and ZZ channels! A shiver down the spine! 5 σ reached!! 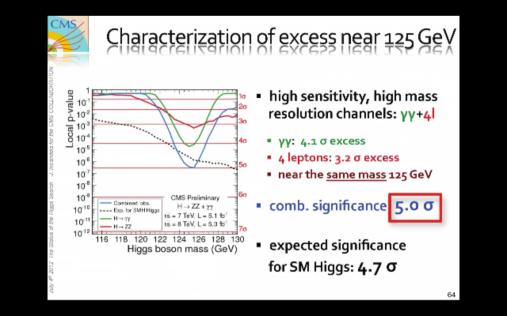 The next channels will not show a peak, but only a broad excess (if any!)

Some excess found, but not significant in WW and ZH channels. Same story for the ττ channel.

And now the full result!

Why this deficit? Is it a statistical fluctuation or what?

JI: “Coupling to fermions and bosons consistent with the SM expectation within 95% confidence level”

JI: “Don’t forget, #Higgs is global: “These results are shared by all of mankind”

FG: “It’s not easy to speak second as all the clever things have been said”

FG: “Sizeable gain the efficiency of reconstruction of physical objects for e/γ/μ. Sensitivity improved for H->γγ and H->ZZ->4l channels”

Both experiments confirm a signal strength larger than expected!

FG: “1.3 times more ZZ events in data than SM prediction, but still compatible within uncertainty with the Standard Model”

Total combination: 5.0 σ at 126.5 GeV! (expected: 4.6 σ)
The best-fit value of the mass is still different between the two experiments. Perhaps the most interesting part is the signal strength larger than predicted. New physics lurking just around the corner?
FG: “We have only recorded 1/3 of data expected in 2012. This is just the beginning.”
Rolf Heuer says “I think we have it, do you agree?”
Peter Higgs: “I’m glad it happened in my lifetime”
Advertisement