While many people love science, few would agree to invest money with very low chances of getting anything in return. Are we at a tipping point in history?

The Gothic Cathedral of Science

It took decades to go from inception to construction, but here we are: humans have created a machine to explore the deepest recesses of Nature. It’s called the Large Hadron Collider, it’s a 27 km long vacuum tube in which protons are accelerated and smashed head-on at four different points. Around each of them is a detector, a sort of enormous 3D camera that takes snapshots of proton-proton collision. A single detector is used by scientists to run hundreds of different small experiments. One of them notoriously led to the significant discovery in 2012 of a fundamental particle called the Higgs boson. Some years ago, Lawrence Krauss called the LHC “the intellectual gothic cathedral” of the 21st century: it took thousands of people from different countries decades to finish it, at the whopping price of the equivalent of about 10 billion USD. It looks like a huge amount of money, but it was very well motivated from a scientific perspective. The most accepted theory of particle physics called The Standard Model (SM) is inconsistent unless there is something like the Higgs boson, and from previous measurements it was very likely that a machine such as the LHC would be able to find it. The SM has its own shortcomings, too, but again, the theory suggested that if there was new physics, it had to be somewhere around the Higgs boson energy scale, so again a machine such as the LHC was supposed to find it. While the discovery of the Higgs was a great success, the latter didn’t happen and has sent the whole field in jeopardy.

Eight years later, we know much more about this entity although many questions remain still unanswered. Does “a structureless excitation of a quantum field that permeates space” mean anything to you? If not, what you need to know is that physicists believe this particle slows down other particles such as electrons preventing them from going full speed (i.e. to travel at the speed of light in vacuum). One of the consequences is that we are here to speak about it. The crux of the problem is that we still don’t know why the mass of this particle is relatively small while the currently accepted theory predicts it could be orders of magnitude larger. Some said it’s like noticing that the difference between the wealth of two billionaires is 20 bucks. Surely it can happen by chance, but perhaps these two work together? Having run the LHC for years since the discovery of the Higgs boson, it’s fair to say that none of the explanations that have been put forward in the past 40 years made any sense from an experimental perspective.

Lately, a huge debate is ravaging in the scientific community after CERN’s announcement of backing up a plan to build a 100 km collider: should we allow more money to be spent to create an even larger and much more expensive collider, or should we just put aside this problem for now, and get back to it when we have a clearer picture? There’s no wonder many people are upset by the idea of making a shot in the dark for a price around 100 billion US dollars with no obvious return. As a matter of fact, no one so far has come up with a practical application of the Higgs boson, although the technology that led us here (e.g. faster electronics, stronger magnets) has some impact in the broader community such as for medical imaging. 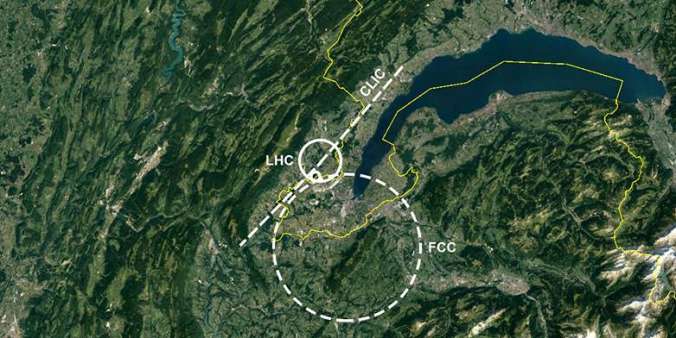 The Three Frontiers That Should Be Four

Should the money collected from taxpayers be spent on still ambitious projects, but with more defined objectives? The frontier of scientific exploration in physics has been divided in three parts: energy, intensity, and cosmic. Energy means more powerful colliders. What CERN proposed to upgrade the LHC is such an example. The stillborn Superconducting Super Collider (SSC) accelerator in Texas in another example gone bad, but at least someone wrote an entertaining novel out of this failure. Intensity means better, more focused accelerators. Cosmic means building ground-based and the space-based observatories or telescopes, or gravitational waves antennae. If you ask me, there should be four: a complexity frontier should be taken into account, for example by understanding the role of artificial intelligence in the scientific process. I suspect that in the years to come it will be some form of AI that will suggest scientists where to look for new clues and find unexpected patterns. Interestingly, just as particle physics went from tabletop experiment to kilometers-long colliders, also research in AI is witnessing an exponential increase in the size of artificial neural networks, especially in the field of human language understanding (the GPT-3 deep learning model has 175 billion parameters and it costs $12 million to train).

As a matter of fact, I don’t really buy the argument that larger is better. While scientists have been looking for physics beyond the Standard Model for quite some time, I believe we have in fact found some evidence already. Unfortunately for some parts of the community, that evidence points to neutrino physics (i.e. so called flavour oscillations and the origin of neutrino mass). Other lines of research point to a possible explanation of Dark Matter in terms of fundamental particles. For this reason, a number of underground experiments are ongoing to find evidence of the existence of such particles by looking at their interactions with ordinary matter in very controlled environments. While I keep my skepticism about this kind of experiments, the return of the investment may be huge. After all, Dark Matter accounts for 25% of the content of the Universe, who knows what may be lurking down there!

Who am I to tell what to do with our taxpayers’ money? Well I want to give a shout-out to Sabine Hossenfelder who put this matter straight: building a bigger collider is a huge investment with little scientific benefit and basically no societal relevance (see this thread on Twitter). Sorry folks, but this is the current state of things. This doesn’t mean it won’t change in the future. It is my belief that other avenues of research will eventually stumble upon a big discovery (most likely about Dark Matter), and that will in turn point out to an energy scale. It’s only then it will make sense to design an accelerator to explore that region in detail. For now, let’s just make the best use of what we have.

I perfectly understand it takes decades to design a machine this big and this complex. I also perfectly understand that people working in the field do not want to throw away the know-how accumulated over the years. But I also believe that technology is advancing at an exponential rate and what seems to require 30 years today it will probably take less than 10 years in the future (think of when Apple failed to create the iPad in the 1980…).

Let me finish by saying that I decided to join the particle physics community for a number of reasons, and that I stayed for almost 15 years among which because I really hoped we would be able to make a discovery that unlocked us the engineering of gravitational fields and literally took us to the stars. An example would be the discovery of Supergravity or some form of Supersymmetry. It’s not sci-fi, it’s bona fide science, I still believe there’s a chance such a thing really exists, but I just don’t think the LHC will be able to see such a thing at the energies it was designed to operate. We have to look elsewhere for now. Let’s not put the cart in front of the horse, or we’ll risk of toppling the whole enterprise.