Less stuff, less waste. It’s as simple as that. In fact, some people are actively advocating what’s sometimes called “happy degrowth”, i.e. embracing a new kind of global economy based on an ecological paradigm and essentially rejecting capitalist ideas. Degrowthers believe we need to shift to a more modest lifestyle as opposed to the constant pressures of economic and territorial expansion that are destroying the planet. While degrowth may be an effective but still very challenging path, I personally do not believe in a massive, global shift in human nature. We want more, we’re going to want more in the next years, too. However, it came to my attention a different, stranger possibility: moving most of our belongings to the virtual world. To survive, you really just need food (not much), a shelter, perhaps some medicines. Not much more. Everything else that affects your mind (culture, entertainment, friendship, love) does not fully need a physical reality, as long as its virtual representation is close enough to be indiscernible from one based on…I’m not so sure what the physical reality is made of anyway. We may have found a way to solve our problem with global warming. But you might not like it.

In Steven Spielberg’s movie Ready Player One you can buy a virtual DeLorean by exchanging virtual money. Still, this creates real pollution.

In the novel “Ready Player One” by Ernest Cline, most of human beings joined a virtual world called “Oasis” where they just go on with their lives, on steroids. If all you have you ever wanted was to drive a DeLorean or visit a distant planet, don’t miss this opportunity. In fact, young kids can even go to (virtual) school in the Oasis, having access to infinite resources that would never be available in public schools in the suburbs of large American cities (I wouldn’t make the same argument for other, respectable Countries). As a matter of fact, this fictional world set in 2044 may not be as  dystopian as it may appear at first glance: if you do not want to drive a real car, you’re not going to increase the CO2 emission either. Nor anyone will extract oil from underground to make your car go, or make plastics, because you don’t need any plastics anymore, do you? Why bother buying a new iPhone when the virtual one is as good as the real one? Why going to Venice when the virtual one is as great as the original one, or even better since there are no tourists blocking your view of Piazza San Marco?

In our (real) world, we are already witnessing a silent revolution. In 2009, a study pointed out that purchasing eBook instead of real books is about six times better for the environment, at least from a CO2 emission standpoint. “In 2008, the U.S. book and newspaper industries combined resulted in the harvesting of 125 million trees, not to mention wastewater that was produced or its massive carbon footprint.” said Emma Ritch, of the Cleantech group. Printed books have the highest per-unit carbon footprint, due to raw materials, paper production, printing, shipping, disposal (30% of purchased books are returned to the publisher, burning more fossil fuels). Moreover, some people believe that poor countries in Africa should explore investments in things like eBook readers for use in schools. Amazon is not going to introduce Prime Delivery in the African savannah soon (or is it?).

The cost of a bit

Still, one may be tempted to believe that a virtual entity such a bit has no impact in the real world. Let’s take a couple of examples, cars and currency. They also happen to be interrelated.

According to a study conducted by Clifford Winston, 90% of Americans drive to work (I assume a similar percentage applies to Canadians), which add up to about 17% of the GDP of their Country. If you worked in a virtual environment, you wouldn’t need to buy a car anymore. Almost no-one would buy a car anymore. Calculating the carbon footprint of making a car is extremely complicated, but this well-written article on The Guardian gives a nice summary of the costs involved in the process. In short: a mid-size car requires more than 15 tonnes of CO2 just to be produced – almost as much as three years’ worth of gas and electricity of an average household (follow this link to calculate your own). Metals have to be extracted, melted, molded. Plastic parts and electronics have to be fabricated somehow. And how about the factory itself? All in all, and probably counterintuitively, the emissions generated to make a car typically rival the exhaust pipe emissions over its entire lifetime. Then, why don’t we turn out attention to electric cars, like Tesla’s? Well, it turns out that car batteries do not shine for their eco-friendliness as one may think at first glance. In fact, a study made by the Swedish Environmental Research Institute  pointed out that battery manufacturing leads to 150 to 200 kilos of carbon dioxide emissions already in the factory, which add up to about as much CO2 as 8 years of gasoline driving.

Now picture this: you’re riding your car on the US Route 163, looking at the amazing landscape of the Monument Valley at the border between Utah and Arizona. Or perhaps you’re driving around the Ireland coastline (clockwise trip), or along the Amalfi coast. Amazing, isn’t it? The catch is – it’s all virtual, but it looks so real. You may event take a picture, or shoot a video. The environment you’re looking at is not being polluted, nor is the real one, for that’s matter. In fact you never had to take an airplane to get there.

Not surprisingly, even virtual reality needs physical objects, i.e. computers that run the simulations. The more accurate the representation, the more calculations per second are need, the more energy you needed. How much do you need? And where does this energy come from? A good example is the creation (“mining”) of the virtual currency named bitcoin. No physical “digging” is involved, but an algorithm has to be run on a computer (or by hand) in order to generate an entity worth the equivalent of “one bitcoin”. Also exchanging bitcoins consumes electricity, as all other peers that are part of the network have to be notified by the exchange (see also: blockchain technology). This sort of trading seems to happen about every 10 minutes. It is estimated that this network of computers consumes as much energy each day as some medium-size countries. In a recent estimate, it is almost equivalent to Hong Kong, as reported by an article that appeared on digiconomist.net:

The continuous block mining cycle incentivizes people all over the world to mine Bitcoin. As mining can provide a solid stream of revenue, people are very willing to run power-hungry machines to get a piece of it. Over the years this has caused the total energy consumption of the Bitcoin network to grow to epic proportions, as the price of the currency reached new highs. 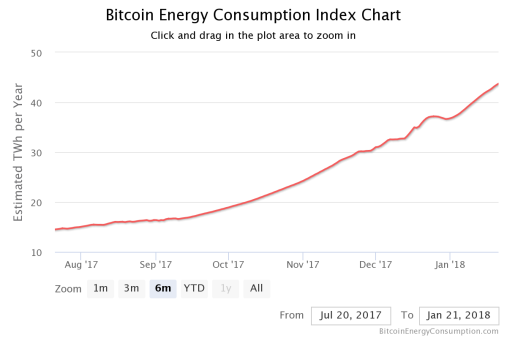 Bitcoin energy consumption in the past 6 months according to a calculation performed by Digiconomist.net

The sustainability of “mining” is still an open debate. Some argue that as long as bitcoins (and other sibling cryptocurrencies) remain a negligible fraction of the world economy, there’s really nothing to worry about. However, in the dystopian future where most of the goods are in fact virtual and are traded by the means of virtual currency, the amount of electricity needed to operate the whole system may represent a serious risk to the Planet. Well, in fact, it depends on where this energy comes from in the first place.

Nobody said the electricity needed to power the computers has to come from fossil sources. And, in perspective, computers are likely to become more and more efficient. In fact, bitcoin mining is not usually performed on “regular” computers for a number of reasons. As a matter of fact, the workhorse of this kind of computation is a (or a set of) graphic cards, commonly known as Graphics Processing Unit or GPU. The typical function of a GPU is to assist the Central Processing Unit (or CPU) with the rendering of 3D graphics and other visual effects, which is in fact a very repetitive task from an algorithmic point of view. These systems are not as flexible as a CPU, which is set at the core of a regular computer. Instead, GPUs are excellent at doing the same (simple) calculation running on different inputs, while consuming much less power than a CPU and being very cost-effective (a good one is worth a few hundred dollars). If we’re talking about a few hundreds calculations per second, a GPU does not even get out of the bed. But if the operations are in the order of several thousand, that’s where they become essential. That’s the main reason why GPUs are deployed to mine bitcoins. But that’s not the reason they were introduced to the market in the first place. There are also other possibilities such as ARM HPC clusters, but these are less common for the moment. Finally, VR headsets seem to be much more energy-efficient that a desktop computer. Likely, most of the calculations will happen on the server-side, with the user wearing VR goggles and haptic gloves at the terminal side.

An employee at a Bitmain facility in Inner Mongolia, one of the biggest Bitcoin farms in the world. Credit: Giulia Marchi for The New York Times

Coming back to the issue of how to generate a large amount of “green” energy, there seem to be a few options available, each with their pros and cons, the main common being solar panels, wind turbines and nuclear power plants. The problem with the first two sources is that their output is not stable (the sun goes down, so does the wind), thus batteries are mandatory to even out the fluctuations. But, as we have seen earlier, producing those batteries is not necessarily eco-friendly, nor is their disposal. Providing stable energy on a large scale is notoriously the hallmark of nuclear energy, although also in this case a life cycle analysis suggests that electricity from atomic energy emits up to 140 g of CO2 per kWh of electricity produced, a figure much lower than gas burning plants but sill much higher than what solar/hydro/wind power plants are capable of. So while the jury is still out, you can take a look on this website at the CO2 emission from different sources for several countries.

I’m sitting on my virtual chair, reading an eBook, just outside of my virtual cottage on the shores of a well-rendered virtual lake in the Muskoka region (the better the rendering, the higher the price. The price of quality does not change in the virtual world). 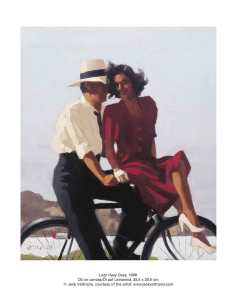 A virtual copy of a painting is probably the best bet to save art from being lost forever.

I hanged on my virtual wall some paintings that I like a lot, such as Jack Vettriano’s Lazy Hazy Days. The original one will be lost one day, but its endless virtual replicas will remain with us as long as human beings will be in existence. Speaking of which, finding a way to reduce CO2 emissions now is also probably the only realistic way we have to remain in existence – the other being escaping to Mars to avoid extinction.